Finally, a dividend update! Some of you thought I had thrown in the towel due to the lack of updates here, but nothing could be further from the truth. Financial independence through dividend growth investing remains one of my main goals even though I may take a detour once in a while.

I know that I should keep the blog updated, but writing wasn’t on my mind the past few weeks. Call it writer’s block, call it laziness – I just didn’t feel like sitting down after a long day at work to write about my goals, investments, and anything else related to financial independence.

Of course, that’s not fair to you guys since I promised to keep all of you updated on my dividend investing. By reviewing my purchases, portfolio changes, and dividend income monthly I show you guys a glimpse into what it might take to become financially free. On top of that, it’s a great way to reflect on my strategy and to keep myself motivated to see the entire endeavour through – it’s a long journey after all.

Luckily there’s the recurring stimulus that is monthly passive income. Every time a dividend payment hits my account I’m filled with joy that I made money without having to lift a finger. And as an added bonus those payments grow every time through the compounding effect of both growing dividends and re-invested returns.

I have nevertheless experienced some difficulties, such as the Kinder Morgan debacle (NYSE:KMI) last year. I was too greedy and tried to increase my income by chasing yield, which resulted in my first sell-off. On top of that, Australian miner BHP Billiton (LON:BLT) decided to cut its generous dividend because of the crushed commodity prices.

And to top things off, the Belgian government decided to increase taxation on dividend income from 25% to 27% in an attempt to shift taxes from labour to capital – except that they forgot that the majority of wealth in Belgium remains in savings accounts and the housing market, but that’s a topic for later.

As usual you’ll find a detailed list of payments and the total amount I received below, together with a review of my past performance and forward outlook.

A whole bunch of companies forwarded a piece of their profits to my investment account simply for believing in their business model. And that’s the beauty of dividend growth investing: you can earn money while you’re asleep, on vacation, or simply at work – it doesn’t matter. The only thing you need to do is remain invested in the business idea of the companies you own.

Now, that’s easier said than done, especially when you take the volatile markets we’ve had the pleasure of riding down and up over the past few weeks into account. And that’s why it’s important you understand and believe a business’ profit model. It’s much easier to remain a long-term investor when you realize that the underlying value of a company isn’t defined by its bid or ask price on the stock market.

But enough about that, you guys are pros anyway! Let’s get to the focus of this article: dividend income.

The final tally for January comes in at €39.63, while February finishes up with a respectable €68.84 – awesome! Some companies jumped months, like Swiss pharma and healthcare giant Novartis (VTX:NOVN), which previously returned a dividend to shareholders in March.

Even more exciting to me is the fact that most dividend distributions were up from last year. American telco AT&T (NYSE:T) saw a 2% increase, while previously mentioned Novartis bumped its dividend by 4%, for example. Of course, these are small numbers and they don’t always cover the higher tax on dividends, but it’s nice to see the growth aspect of my dividend strategy at work.

Speaking of growth, let’s take a look at the overall picture – I have managed to build my income through new investments too, after all. A quick look at my dividend tracking spreadsheet, which remains an awesome tool that I use to manage my international investments, shows triple digit growth.

January’s income skyrocketed by 358% and February followed with a 149% increase – boom shakalaka! 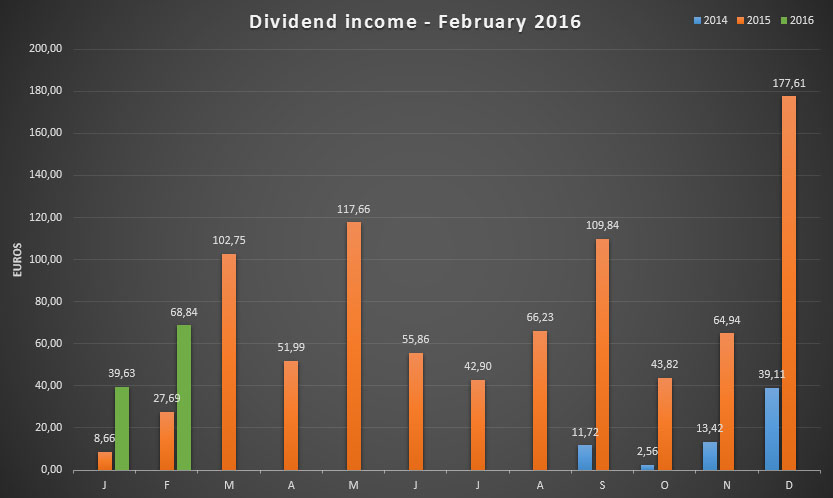 As a result, my average monthly income for the entire year stood at 9 Euros already at the end of February. Last year it took me until the end of March to reach that number – truly impressive growth.

And new additions to the portfolio are likely to push these numbers even higher over the coming months. For example, I’ve added to my Unilever (LON:ULVR) and AT&T positions because I was impressed by their latest results. Similarly I increased my stake in Novartis, but mainly because the stock took a beating after releasing an update on its suboptimal performance.

I’m already looking forward to the end of March as it’s about to turn into a big month once again.

Even though I had planned to publish my income goal for 2016 after making my 2015 infographic, I didn’t get to it yet. However, I’ve set my target at €1500. I could be overshooting big time, certainly now that BHP Billiton cut its dividend, but it’s better to aim high and fall a little short than making an easy target, right?

With two months under my belt I think I’m well under way to reach my goal. And at the risk of sounding like a broken record, if I don’t make the €1500 mark I’ll still feel like I’ve already won for life!

Over the coming months I hope to write more, so stay tuned for dividend reports, info on my savings, and other financial independence talk. Thank you for reading and for your continued support.