May is undeniably the preferred month for European dividend growth investors. With most European companies paying a dividend just once in the year, May feels like Christmas during spring time. Our income charts see a strong spike upwards and so does our investor’s spirit.

Naturally, every month is a small step closer towards our end goal – financial freedom or early retirement. But to me May emphasises those small steps even more. It provides an often needed mental boost after the first quarter of the year. And judging by your comments on previous articles I dare to say that I’m not the only one who feels this way.

Now more than ever it’s become clear to me that saving a large portion of your income and investing it for the future is an excellent strategy to build long-term wealth. Just take a look at my booming net worth to see what I’m talking about. However, as a dividend growth investor I try to take advantage of more than just capital appreciation.

Indeed, my main focus is on sustainable and steadily growing dividends. That’s passive income in the form of earnings distributions by the companies I own a small piece of. It’s here that the power of compound interest plays a big role: re-invest those dividends and you’ll be sitting on a mountain of future cash flow. Ultimately, that passive cash flow exceeds your expenses and will render you financially independent.

Let’s see what I’m talking about!

At the start of 2016 I set my sights on a €1,500 dividend target. While that number may be a long shot, I’ve found that it’s relatively easy to put together a portfolio that throws off a sizeable amount of income each and every year. At the moment I’m nearing 1,300 in forward dividends – an amazing feat in under two years in my opinion.

May turned out to be similarly amazing, although a bit interesting. Two additional companies forwarded me a piece of their profits compared to one year ago, but one of my largest positions changed its dividend policy due to increased taxes. As a result, my May income hasn’t skyrocketed like should be expected.

Twelve payments – that’s twelve businesses forwarding me a piece of their profits simply for being a shareholder that believes in their business model, amazing. As you can see, the majority of dividends comes from European stocks with beer giant Anheuser-Busch InBev (EBR:ABI or NYSE:BUD), healthcare mogul Sanofi (EPA:SAN), and cinema chain Kinepolis (EBR:KIN) pulling a lot of weight.

Interestingly, Home Invest Belgium‘s (EBR:HOMI) payment fell from last year’s 3.75 Euros per share to just 0.25 Euro per share as a result of the aforementioned tax change. In an investor-friendly move management decided to pay out another 3.75 Euros last year in December under the old tax laws one final time. As a result, the 0.25 Euro payment this month should be considered a final dividend for the 2015 fiscal year.

In total, I raked in a whopping €142.93, the second highest number yet after December 2015. Furthermore, May marks the third month in a row that I manage three digits in free-of-work income. That’s a ton of real purchasing power straight into my pocket!

Even though my investments didn’t propel this month’s dividend forward like I expected, my total dividend income still managed to grow by a solid 21.47%. Most of that increase obviously comes from my continued efforts to save and invest as much as possible, but a small portion also comes from organic growth. It’s what I’ve previously called the double dip effect.

Unlike me, the companies I own a small piece of don’t know what downtime is. They don’t sleep or go on vacations – no, they continue to work tirelessly to increase their bottom line and earnings, and thus my future dividend income. Their ceaseless efforts are reflected in the chart below. 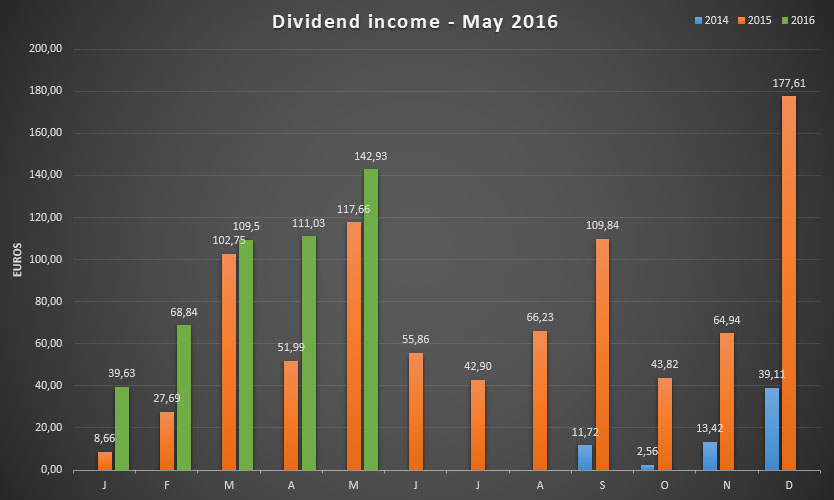 At the moment I’m hovering at an average monthly income level of 39 Euros for the entire year. Last year it took me until August to get to that number, so I’ve got three months on 2015 already. Considering that Home Invest Belgium’s dividend isn’t included in this year’s numbers I’d say that’s mightily impressive!

Of course, I won’t stop there. I’ve already put additional capital to work in US-based chip maker Qualcomm Inc. (NYSE:QCOM) by quadrupling my position. On top of that I’ve doubled my stake in British utility National Grid plc (LON:NG). Both investments combined boost my annual income by €68 after taxes.

When we add May’s income to the dividend piggy bank, we’re already at 471.93 Euros for 2016. That’s 30% of this year’s goal – not too shabby, but it seems unlikely that I’ll get to the €1,500 threshold. However, that won’t get me down. I already feel like I’ve won the big lottery ticket simply by being able to afford a journey towards financial freedom – what a luxurious position to be in!

Some call it crazy, but I’m still convinced that regularly saving and investing any excess cash you run into forms the bedrock of a financially secure and potentially free life. Sure, I might not be able to afford everything I want, but I certainly feel like I can afford anything I want.

Thank you for reading and for your continued support. Without you readers this journey wouldn’t be nearly as fun as it is now – I’ve rediscovered that after my small hiatus.

How was your month in terms of dividends? Did you enjoy the European dividend season as much as I did?