A couple of days ago I posted my long overdue net worth update, but as you all know building a huge asset portfolio is not the main goal here. First and foremost I want to achieve a sustainable and passive income stream through dividends rather than a quickly appreciating list of assets. So let’s see how I’ve been doing on that front for the second half of 2016 and let’s set an income goal for 2017!

Indeed, my main focus is on sustainable and steadily growing dividends. That’s passive income in the form of earnings distributions by the companies I own a small piece of. These dividends start out small, but through the the power of compound interest they grow over time into a passive cash flow that’s so massive it covers your daily expenses.

At that point in time you’ll be become financially indepedent.

Compound interest in itself is a magical phenomenon since a pile of money automatically grows faster and faster over time, but through dividends it becomes even better. Dividend growth investing adds a special ingredient through what I call double dipping: while the dividend growth stocks you own try to increase their distributions every year (internal compounding), you can aid and fuel the compounding process by re-investing already earned dividends (external compounding).

As a result you effectively double the compounding effect and really propel your financial independence date forward.

That’s why I find keeping track of my income growth is so important. It gives me monthly feedback on my progress towards financial independence. Year over year growth shows that I’m on the right track, while flat numers or even a decline means I need to step up my game. And by posting my numbers here you guys get to follow along and see how my strategy materialises over time.

The main reason why I prefer dividend growth investing over other long-term strategies lies in the fact that it provides a re-inforcing stimulus every couple of days. On top of the salaried pay check that hits my account every month, there’s also a ton of dividend payments that trickle in on an almost daily basis.

Even though these payments are rather small, I’ve found that they provide a great mental boost to continue my efforts to reach financial independence.

Furthermore, I believe it’s relatively easy to put together a portfolio that throws off a sizeable amount of passive income on a regular basis. At the moment I’m at 1,800 Euros in forward dividends after taxes – a large amount of money for a little over two years of progress and given the low interest environment we’re currently in.

The list below shows all dividends I’ve received in the second half of 2016. All dividends are listed in Euros, and are after foreign withholding taxes and a 27% income tax levied by the Belgian federal government.

The total amount of dividends for the second half of 2016 comes out at €724, which is almost as much as I received for the entirety of 2015. Most of the growth obviously comes from new purchases such as Belgian mono-holding Solvac (EBR:SOLV), which only holds shares of chemical group Solvay, and increased positions in brewer Anheuser-Busch InBev (EBR:ABI), utility National Grid (LON:NG) and chipmaker Qualcomm (NYSE:QCOM) amongst others.

Dividend growth was limited because of the increased taxes in Belgium (+2%). Of course, currency fluctuations also mask the effect of dividend growth somewhat. While healthcare giant Johnson & Johnson (NYSE:JNJ) hasn’t increased its dividend payment in US dollars in the past six months, the net payment I received still changed from €8.69 in September to €9.00 in December.

Nevertheless, I’m stoked about these numbers. Even though the individual payments are relatively small, combined they add a ton of real purchasing power straight into my pocket! €1,302.76 for the entire year, to be more precise.

Easily my favourite time of year to drool over the dividend tracking spreadsheet I made is the end of the year. That’s simply because it then clearly shows the growth that both my portfolio and dividend income have undergone compared to the year before.

In 2015 my motto was “triple digit gains”, so it’s sad to see that coming to an end with my overall income being to high to keep up the initial growth – which is of course perfectly normal. Though there were only four months with triple digit numbers, I still managed to make good progress and even crush my previous income record from December 2015.

As a result my passive income from investments at the end of 2016 stood 49.75% higher than the year before!

Clearly the companies I own a small piece of have no idea what downtime is. They continue to work tirelessly to increase their bottom line and earnings, and thus my future dividend income. Their ceaseless efforts are reflected in the chart below. 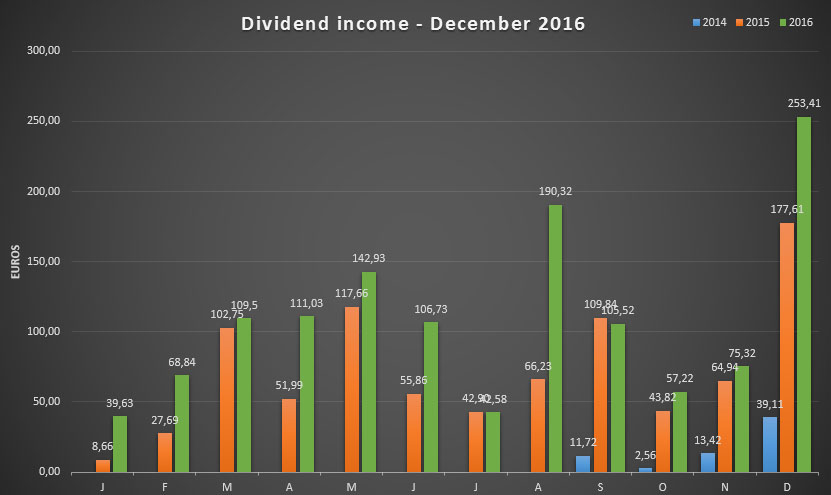 As a result my average income for 2016 also grew by a rather large amount: up from 2015’s €72.5 to €108.56 on average. And with my most recent acquisitions that number can only grow in the future, especially since new dividend income will be re-invested in the stocks I already own or in new opportunities.

At the start of 2016 I set my sights on a €1,500 dividend target. While that number might have been a long shot, it turns out I came relatively close. The main reason why I didn’t make it lies in the fact that I invested more in European companies that mostly pay a dividend once a year than I assumed at the beginning of the year.

Still, I still feel like I’ve won the big lottery ticket! Earning over 1,300 Euros without having to lift a finger is a great feeling. That’s why I continue to save and invest like a madman to fuel my financial independence and propel my early retirement date forward. Sure, I might not be able to afford everything I want, but I certainly feel like I can afford anything I want.

For 2017 I’ve decided to set my passive income goal at €1,900, which is a 600 Euro increase from 2016. That number is a bit more realistic than last year and should be perfectly doable without any major headwinds.

Speaking of headwinds, the Belgian federal government in an attempt to balance their budget have decided to increase dividend taxation once again. In 2017 I’ll be paying an additional 3% of taxes on all dividends for a total of 30%. Any further tax hikes will most likely lead to a change of strategy because it’ll eat into my future returns too much, but for now I’m staying put.

Thank you for reading and for your continued support. Let’s make 2017 a big success together!