Boom shakalaka! What a month December turned out to be to round off my first full year as a dividend growth investor. Because most of my holdings forward a piece of their profits in the last month of every quarter it felt like Christmas lasted an entire month. Jingle bells, indeed!

As a passive income focused investor few things get me riled up like seeing a bunch of dividends hit my accounts. It’s not a get rich quick scheme, but when over ten companies pay you a dividend every quarter the strategy nevertheless amounts to a rather large source of income quickly.

The dividend payments themselves are just one part of the equation though. Indeed, dividend growth investing is like double dipping your savings in a spicy sauce called compound interest.

On the one hand, the companies you own a piece of compound internally by increasing their distributions each year. Take the example of McDonald’s (NYSE:MCD) you’ll find below in the list below; this fast-food chain paid a $0.89 quarterly dividend compared to its $0.85 dividend last year. In other words, I’m enjoying an almost 5% higher payment this year without getting my hands dirty whatsoever.

On the other hand, and this is what this series of articles is all about, you can aid your passive income growth by re-investing any dividends received. By doing so, you drive your investments forward externally, thus effectively doubling the compounding effect.

Ultimately, both effects lead to a point in time when your investment income exceeds your expenses, which in turn renders you financially independent. That’s why I find keeping track of my income growth so important. On top of that you guys get to follow along and see how my strategy materialises over time.

On top of my regular paycheck, my year-end bonus and a rather big tax refund, I also received additional income from eleven international companies. It should come as no surprise then that I had money coming in almost every day this month. And all of this happened while I was out doing my thing, without having to lift a finger.

Let’s see which businesses pitched in towards my passive income stream!

What I really like about this month’s payments is how they all come from such different backgrounds. There’s a bit of health care, utility businesses and consumer products on the more defensive side, but also energy and information technology. Because of this diversification it’s rather unlikely that December’s income stream ever dries up.

Even better is the total amount: €178 in fresh money, whoa!

Most of the growth spurt comes from a policy change over at REIT Home Invest Belgium (EBR:HOMI), however. Because the Belgian federal governement raises the taxes on REIT dividends from 15% to 27% from 2016 onwards, the good management over at HOMI decided to introduce an interim dividend under the current 15% regime. As such, this is only a small Phyrric victory.

Regardless, I’m really happy with this month’s progress. What’s not to love when your passive income covers your entire utility, telecommunications, and food expenses? And of course, these dividends aided me in building my stake in Diageo (LON:DGE), the world’s largest distiller and a solid dividend growth stock.

As a consequence, the loss I took on the KMI debacle earlier this month didn’t hurt too bad – psychologically at least.

One of my favourite things to say with regards to dividends is “up, up, and away!” and the following few paragraphs of this series of articles epitomise that spirit perfectly. Every month I’m delighted to see a big increase in passive income in my dividend tracking spreadsheet – triple digits, for the win!

And December is no different from previous months like October and November. My income level is a whopping 354% higher compared to 2014. 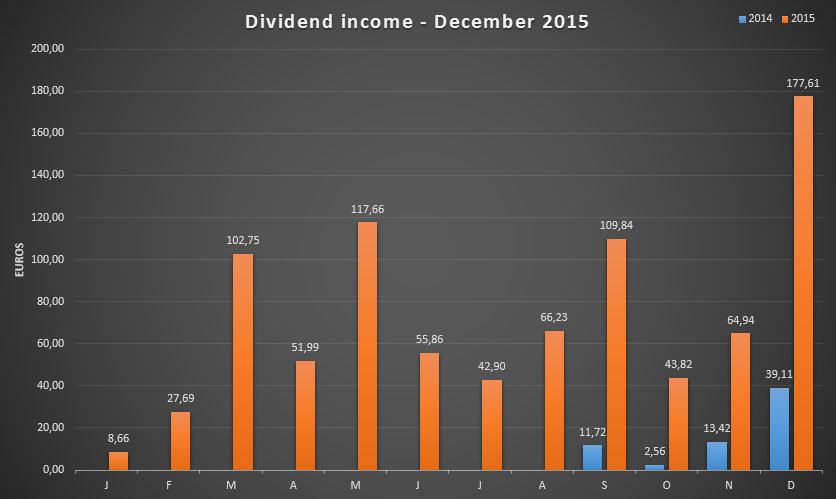 Subsequently, my average income for 2015 grew by a rather large amount too: up from November’s €58 to a solid €72.5 on average. And with my recent acquisitions of equipment manufacturer Caterpillar (NYSE:CAT), oil tycoon Royal Dutch Shell (AMS:RDSA or AMS:RDSB) and aforementioned Diageo that number can only grow in the future.

Looking forward, the above bodes well for January next year. As you can see, January of this year was a rather slow month, but I currently have a couple of extra payments locked in already so I should be off to a fantastic start in 2016 in terms of free-of-work income.

In September the actual passive income my portfolio generated already broke through my initial goal for 2015 by jumping over the €500 mark. So the entire fourth quarter is icing on on already awesome cake. Sometimes I still can’t believe how fast I boosted my income towards €500, especially because I’ve achieved dividend income to the tune of €870 for the entire year, which is 74% more.

At the risk of sounding like a broken record, I truly feel like I’ve already won the Win for Life lottery. With a high savings potential and the power of compounding interest as a tail wind it feels like nothing can go wrong. Of course, things happen, like the setback Kinder Morgan (NYSE:KMI) was to me, but overall I feel like I’m on a good path to financial independence.

Besides, I’ve just turned 26 and have plenty of time to get where I want to be. I already feel financially secure, both because of the assets I’ve already gathered and  because of my frugal lifestyle, so financial independence is only a small step away.

I sincerely hope you guys all feel the same way. Let everyone know in the comments how 2015 turned out for you and what your dividend goals are for the upcoming year. Let’s make sure 2016 is even better than 2015!

Thank you for reading and for your continued support – I appreciate it a ton.