Oh boy, have I got a treat for you guys – a double dividend income update! Well, that’s not really a treat when considering you have all been waiting for over a month for October’s numbers. Even though I haven’t been active much in our financial independence community, my passive income in an antithetical way has been. Fresh and free-of-work cash has consistently hit my brokerage accounts like in the past.

And there’s been a ton of it.

As most of you know I broke through my initial goal for 2015 by the end of September already, a truly remarkable achievement considering I hardly earned any dividend income last year. I’ve often said it comes down to saving a big chunck of your paycheck, investing those savings tirelessly, and keeping at it – turns out, it’s true!

Of course, you’ll need a pinch of luck too. Just look at what the stock market did to my portfolio over the past few months. After a long downturn stocks across the board shot up, netting me a massive 7+% net worth growth in November. While total portfolio value isn’t all that important for a dividend growth investor, such an increase provides a nice mental boost.

In this update I once again want to give you guys a clear overview of how a financial independence journey through dividend growth investing materialises over time. By being as transparant about my numbers as possible I hope to motivate you all to go after financial freedom too.

Let’s take a look at October’s and November’s numbers, shall we?

October and November are usually slower months for my portfolio, because only the third month of every quarter contains most of my regular paying dividend stocks. That’s why I was pleased to see October finish at almost €44 and November at nearly €65 – both numbers are over the monthly average I had set for myself this year.

Most of October’s income came from my recently increased position in French oil tycoon Total (EPA:FP), which performs remarkably well considering the negative sentiment surrounding anything energy at the moment. While Total can’t control the price of oil, it’s business structure as an integrated oil company provides at least some sort of cushion against the bloody oil markets.

As usual, November turned out to be heavy on telecom again with AT&T (NYSE:T) and Verizon (NYSE:VZ), the two largest operators States-side. On top of that my brand-new investment in Caterpillar Inc (NYSE:CAT) literally paid its first dividends, with Anheuser-Busch Inbev (EBR:ABI or NYSE:BUD) rounding out the month nicely because of its dividend that was 66% higher than last year – how’s that for dividend growth?

All in all, I’m a happy camper. These numbers are way higher than I could have imagined in even my wildest dreams. It’s awesome to see you can cover your monthly heating and electricity bill with money that others worked hard for to get to you.

What I take away from these short-term successes is that dividend growth investing and financial independence in the long run are viable strategies. Yes, I’ll have a setback here and there, but overall I’m moving in a desirable direction; a direction in which I’m not dependent on a salaried income alone anymore.

I already touched upon brewer AB Inbev’s incredible year-over year growth rate, but let’s see how my overall performance fared these past two months compared to 2014.

Boom! I’ve obviously crushed last year’s numbers. With a level of income that’s 1600% higher for October and almost 400% higher for November even that’s an understatement in my book. My dividend income isn’t just taking off, it’s taking off at the speed of light – now where’s that faster-than-light drive? 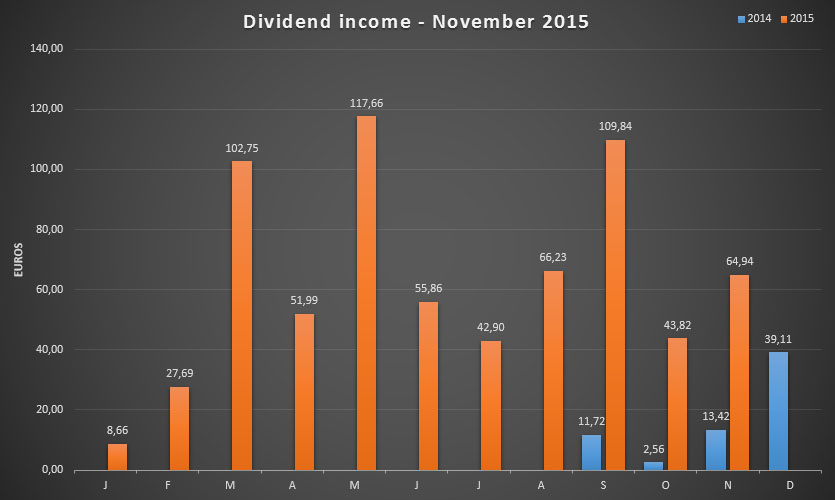 As a result, my average income number for 2015 increased too. Over the past eleven months I pulled in about €58 on average for the entire year, so that’s number set to increase even further due to December’s heavy hitters Royal Dutch Shell (AMS:RDSB) and Unilever (LON:ULVR).

And the best part? That number will continue to grow all on its own even if I decide not to do anything anymore. It’s the often misunderstood secret ingredient of the dividend growth investing double dip at work and by far the most potent aspect of a dividend strategy.

Nevertheless, let’s not get ahead of ourselves here. While dividend growth investing is a very powerful strategy indeed, it still holds a bunch of risk and uncertainties, no matter how much planning and hedging you do. That’s why I’m glad I can always fall back on my good money habits. Even if one aspect of your grand strategy doesn’t work out the way you initially conceived it, you won’t drown in a world of sorrow.

At the moment though, No More Waffles land is sunny and rosy like you wouldn’t believe. I’ve accumulated almost €700 in passive income for 2015 even though I just started. Had you shown me these numbers one year ago I would not only have asked you where I could put my name down, but also offered you a bus ride to the nearest loony bin.

As it turns out I underestimated the power of compounding interest.

I hope you guys did too and that you’re all well on your way to crush your 2015 goals! With just one month to go we’ll know soon enough if we should continue our track record into 2016 or up the ante. Thank you for reading and for your support.