Boy, did I feel like a simpleton when someone first explained the concept of compounding interest to me. At age 23.

You read that right; I was 23 years old when someone first introduced compounding interest to yours truly. Introduced is actually a much better word than explained, because the term compounding interest is so obvious in and of itself that I immediately understood its meaning – fellow linguistics majors raise your hand! Still, I was literally blown away by the strength of compounding interest, especially in the long run. 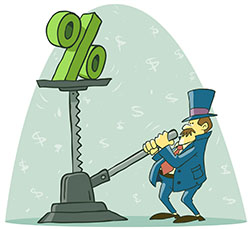 Per Wikipedia, the term compounding interest  denotes interest added to the principal of a deposit or loan so that the added interest also earns interest from then on. Basically, if we deposit €10,000 at a 6% interest rate, the next year our deposit will have grown to €10,600 all by itself. The third year our deposit will be sitting at €11,236 and not €11,200 because the previous interest was added to the €10,000 principle of the first year. Yawn, boring! Let’s clarify with a graph (click to enlarge). 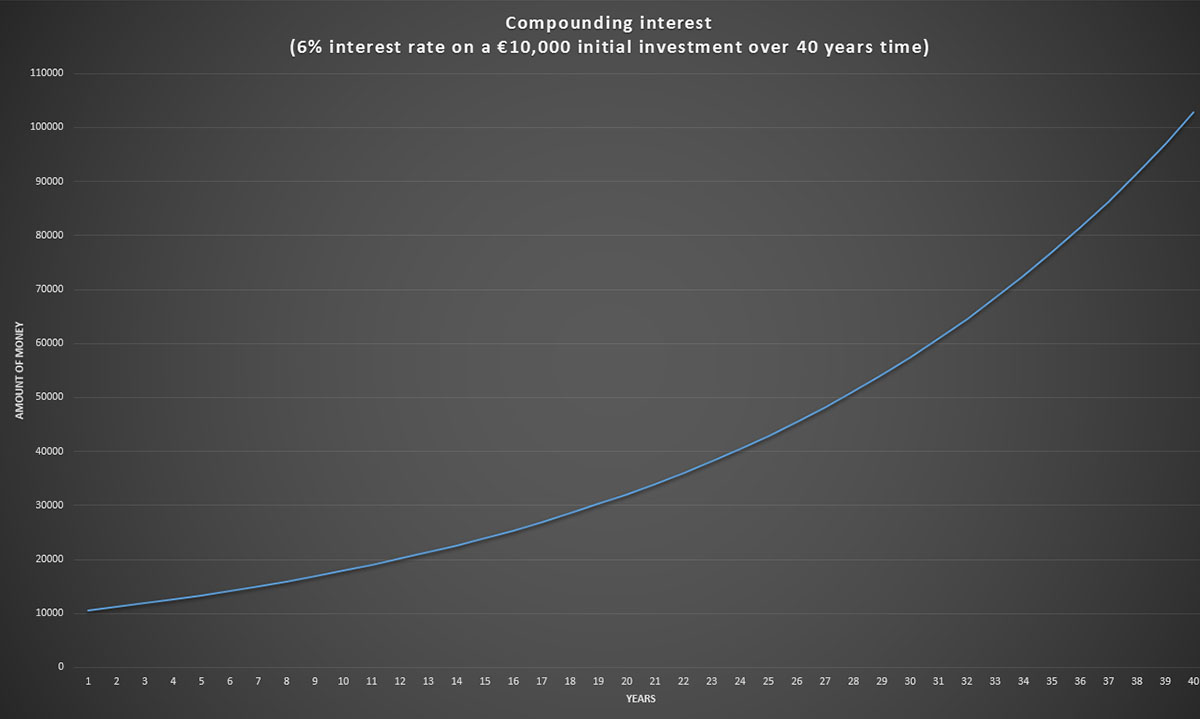 Lo and behold the power of compounding interest: over 40 years time your €10,000 initial investment will have compounded to over €100,000 without lifting a single finger! In layman’s terms that means your money earned you even more money.

The part that absolutely blew me away? The speed at which your pile of cash potentially grows. The curve above clearly is exponential in nature, meaning it will trend upwards faster and faster each year. After a hundred years the €10,000 will be worth almost €3.4 million at a continued 6% rate!

Of course, hardly any of us will reach that age, so imagine we put an extra €10,000 to work every year at the same conditions and we started investing at the age of 25. Basically, we’re investing ten thousand euros every year for forty years at 6% interest. By the time we turn 65, we’ll have €1,207,998 in the bank. That’s three times as much money as we actually set aside in the first place (40 times €10,000)!

As a result, it’s paramount that you start investing your savings early on since time is compounding interest’s best friend. Consider two people aged 25. Person A, on the one hand, invests €10,000 yearly for twenty years and then completely stops adding money. Person B, on the other, puts in €30,000, but starts twenty years later. The graph below shows what happens by the time both reach age 65 (click to enlarge). 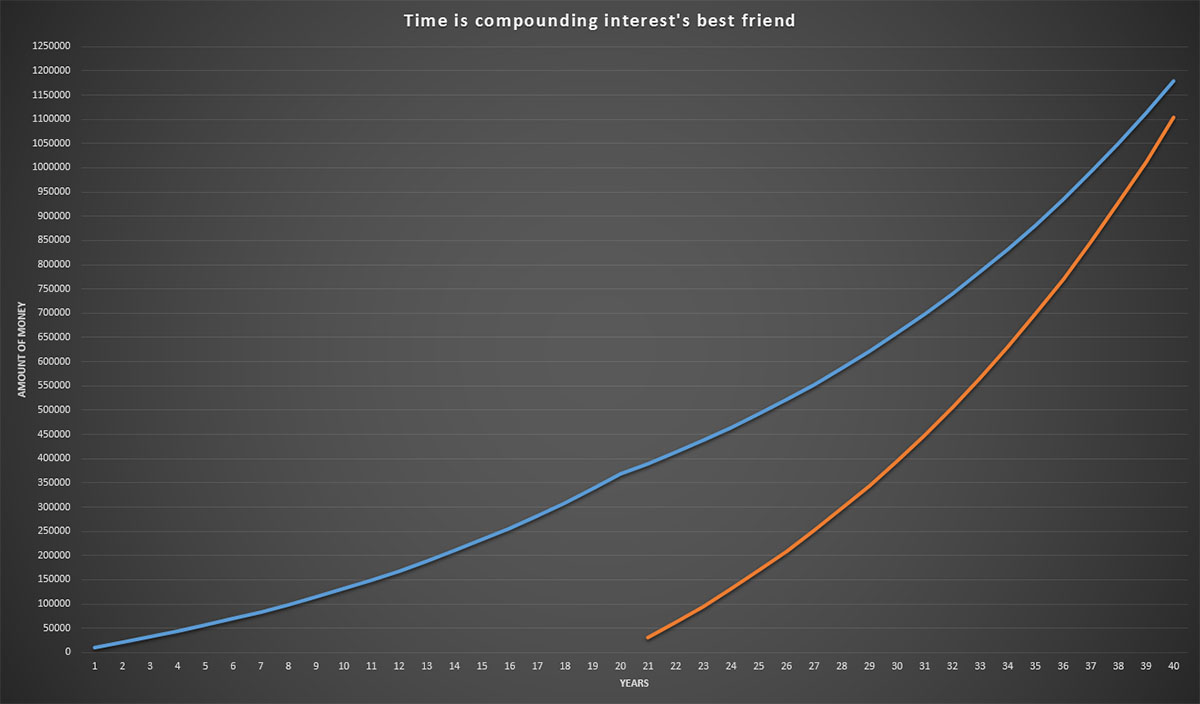 Person A (blue line) accumulates €367,856 in twenty years after which his money automatically grows to €1,179,764 without adding a single dollar. Meanwhile person B (orange line) starts investing when person A stops his automatic contributions, but even tripling the yearly amount of cash invested won’t help person B catch up with person A. Ultimately, he ends up accumulating only €1,103,568, while putting in a lot more of his own money.

Were you already familiar with the power of compounding interest? If so, when did you start taking advantage of it? If not, do you plan to? 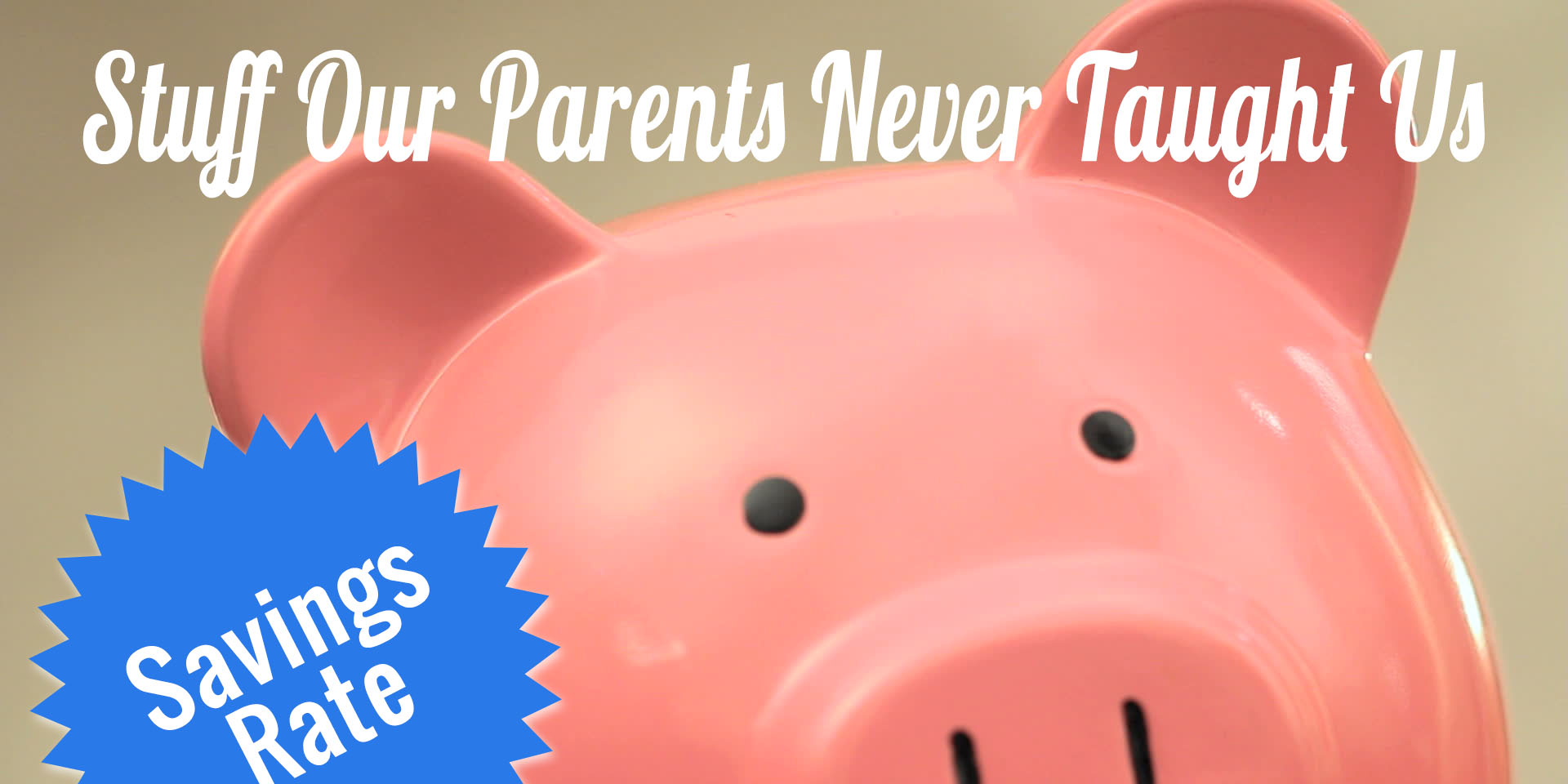 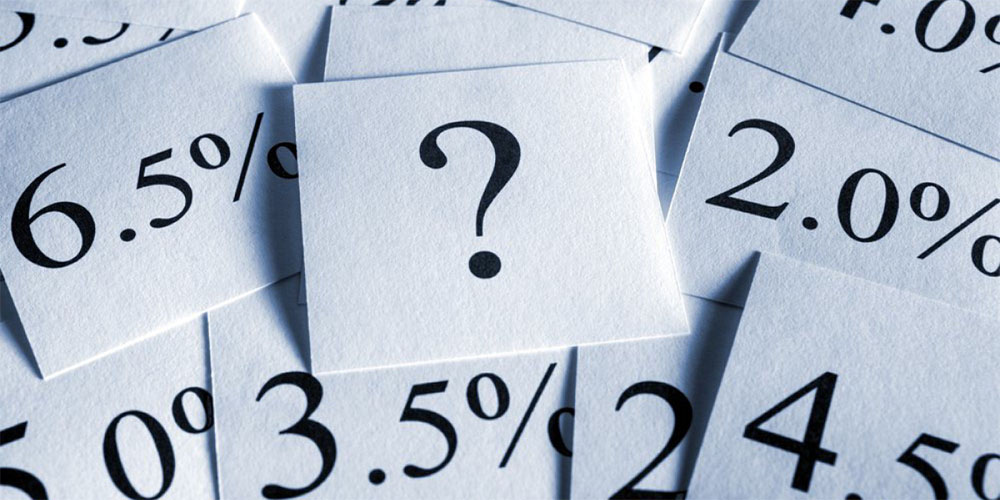